This is a commentary on body image within the Sangha. It came as a result of living with women and men in temples, seeing first hand how body image impacts our roles within the temple. I received a copy of the Karmans of the Creation of Virtue from another temple. It was an eye opener. I would have thought that body image does not matter in a Buddhist Temple, but it does. I thought such worldly things were beyond our walls. I read with disgust at first in the Karmans of the Creation of Virtue in a footnote about encouraging monastics to be healthy, eat healthy and maintain a healthy body weight.  Indirectly it felt like a judgement without having the facts at hand.

It was just a good supportive comment but it raises important issues about health and imagery of the Sangha who are also subject to various outside influences, either through their own media groups or their laity or even from their own perceptions regarding health and body weight.

The classic imagery of Sangha are thin bodies with no fat, no hair, no facial hair, and no body hair.  However, across all races and genders there are rich variations of human forms among us.  But directly and unspoken are the ideal forms.

Bhikshuni Sangha have it wrong in most Asian cultures with their bound breasts or in an effort to look like the ideal male form very thin and flat chested, no doubt they were influenced by the imagery of the past showing bhikshuni without breasts.

In the West women are not going to push their breasts under layers of vests that are 4 sizes smaller so their breasts don't show in their robes.  There are not a lot of women who are small chested here, many thin with big breasts and many fat with small breasts or variations of both.

In Asian many women already were used to breast binding and it carried into their robes.  In Europe women even do not wear western bras replacing them with camisoles and vests instead.  The culture of breast binding is ancient and with our level of education on body imagery is just harmful to our young women and laity who have girls.

Right now, I am large and most of the time I used one sports bra or one bra, not two or three at once, and not 4 sizes smaller than what I need.  During training, my bra was tossed in favor of layers of vest and t-shirt plus a short outer shirt and pants covered by a long vest.  I was not happy, I missed my bra, it was expensive and fit my small breasts giving me the needed support the bra-maker said I needed.

The robes have to be changed to accommodate modern healthier practices.  Bra or no bra, breasts are a mark of women that we should not have to bind flat to look like men or boys.  We are not Greek kori figures after all.

The Greek kori statuary forms come to mind, along with stylized imagery in classic silk screens and paintings of Sangha.  Historical references rarely show the variation in form of the actual masters they are said to depict.

The thin emaciated form is highly sought after by laity and Sangha.   This causes problems in health and distractions from cultivation when monastics are encouraged to be thin yet eat like pigs at meal times.  How on earth are you to keep healthy when eating beyond your natural capacity or willingness?

It seems that laity have been on this awful bent, concerning their own weight issues.  It seems that the donors are equating a good virtuous Sangha member as a walking skeleton, because if thin then the practice must be demanding and therefore a sign of virtue.  Thus the motivation of Sangha to remain unusually thin to gain the benefit of donors to stay alive.

I'm not saying people in robes are doing this on a large scale, thank goodness.  But unfortunately in various ways the laity are singing the praises of those that stay unusually thin, while equating this with a good practice.  There is an alarming trend now in Pure Land to go on 10 day fasts to see Amituofo and the Pure Land.  It is closely aligned with a current master known as Ven. Jing Kong an elderly monk in the Pure Land tradition.  He preaches about the Dharma Ending age and many of his followers both Sangha and laity are practicing extreme asceticism in their over excitement.

I can't support such activities because they are not what the Buddha taught, particularly when Buddha always and often said practice was according to the middle way, not asceticism.  This is the one big flag that I hope people wake up themselves regarding trendy practices labeled as Buddhist.

I would never ever encourage people to go to extremes, it's not a contest, the world is not ending, Buddha dharma is preserved, propagated and protected by Sangha who value it.  And Sangha who also practice Pure Land methods moderately follow closely Buddha's teachings.

What label would you put on these photos? 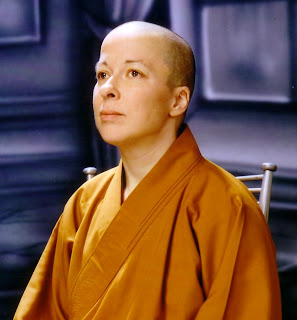 2002 Ven. Hongyang sramani at 118 pounds, healthy weight;  I arrived suffering from old back injuries and told the abbot I could not lift the heavy boxes, he didn't care; accommodating me was not in play when laity needed their food or services, had to ditch the double leg braces because he made me walk 10 blocks very quickly to get to the hospital and back, then do bowing services with them on! It made more health problems and blisters on the contact points.

2005 Western Buddhist Monastic Gathering, Shasta Abbey, Ven. Hongyang 160 pounds; this was the best place I really enjoyed their place, it was filled with kind monastics!  I began to trust temples again after this wonderful experience.

2013 Western Buddhist Monastic Gathering, CDR,  Ven. Hongyang 190 pounds; my next favorite monastic place to visit is City of Dharma Realm a Chinese nunnery.  They have a smorgasbord style of cafeteria, it was wonderfully healthy! 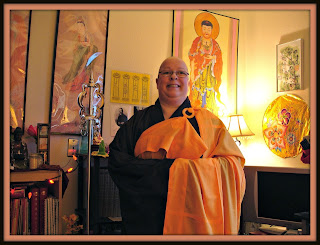 Now I am 187 pounds, since February 8 after I got a Misfit Shine 2.  I've eliminated as much processed food as I could, increased my stretching and vastly improved my sleep awareness with this tracker.  It reminds me to move, interrupting my translation sessions nicely.  I hope this trend continues.

My injuries stopped me from moving, all my injuries were made worse at my former temple.  I could not keep up with a 30 year old strong monk, even he demanded me to acting as if I was in my 20s when I was in my mid-40s!

There is a certain amount of cruelty in nearly all cultures that portrays obese people as stupid or mental, it's very sad reflection on the Sangha when they engage in this kind of thinking.  Behind the walls I've been aware of how people act towards me after seeing them behave towards others they called "fatty" in a supposed kindly manner, basing their perception on what they see alone, it affects whether they want to come and talk to me.  This is true of the elite whites in robes as well, and it makes me wonder if that snobbery is due to elitism rather than race, since I have first hand experienced this in temples when I have visited them.

Genetics comes into play when you age at at certain point, also injuries that are permanent in my case both people can do nothing about.  If your Aunt Grace or Uncle George were fat, you saw your parents get fat as they aged then the likelihood of you becoming fat may be true to some extent.

Very few people have suffered from obesity through sheer neglect while in robes.  As I found out from my friends who shared a lot their weight gain comes from abuse and unhealthy temple foods that are high in salt and fat lacking in proteins and needed balance in nutrition.

Temple food culture is inherited as well.  In my former tonsure temple there was too much frying, too much salt, and oil; heavy use of preserved veggies, and vinegars.  I've eating in other temples and their foods while tasty are no better; unless they offer a salad bar and you can pick and choose your food choices.  Smaller ones if they are Asian are very used Ito high salt and little balance in nutrition.  I learned to drink gongcha in the afternoon and it helped but did not stop the effects of high salt diet.

Healthy choices are not in the control of individual Sangha unless they live in solitude and provide their own meals, even laity providing meals can be a disaster to their health.  I limit meal treats out, even do not allow myself to visit and eat at anyone's homes anymore.  I keep my own food simple and very low salt and it's working for me.  I've a slow weight loss because of aging and injuries but I am optimistic that I can achieve my goals.

Please keep comments limited to Buddha dharma, no debates, understanding that harmony is best when there is mutual respectful posting. Thank you.
NO LINKS allowed, comments will be deleted if a link is found. Please be courteous. If you want to share this post do so in your blog.